Getting a Django Application to 100% Test Coverage

Code coverage is a simple tool for checking which lines of your application code are run by your test suite. 100% coverage is a laudable goal, as it means every line is run at least once.

Coverage.py is the Python tool for measuring code coverage. Ned Batchelder has maintained it for an incredible 14 years!

Let’s look at how we can integrate it with a Django project, and how to get that golden 100% (even if it means ignoring some lines).

Install coverage with pip install coverage. It includes a C extension for speed-up, it’s worth checking that this installs properly - see the installation docs for information.

Then set up a configuration file for your project. The default file name is .coveragerc, but since that’s a hidden file I prefer to use the option to store the configuration in setup.cfg.

This INI file was originally used only by setuptools but now many tools have the option to read their configuration from it. For Coverage.py, we put our settings there in sections prefixed with coverage:.

This is where we tell Coverage.py what coverage data to gather.

An issue I’ve seen on a Django project is Coverage.py finding Python files from a nested node_modules. It seems Python is so great even JavaScript projects have a hard time resisting it! We can tell coverage to ignore these files by adding omit = */node_modules/*.

When you come to a fork in the road, take it.

An extra I like to add is branch coverage. This ensures that your code runs through both the True and False paths of each conditional statement. You can set this up by adding branch = True in your run section.

As an example, take this code:

With branch coverage off, we can get away with tests that pass in a red widget. Really, we should be testing with both red and non-red widgets. Branch coverage enforces this, by counting both paths from the if.

This is where we tell Coverage.py how to report the coverage data back to us.

Your Django project probably has a lot of template code. It’s a great idea to test its coverage too. This can help you find blocks or whole template files that the tests didn’t run.

Lucky for us, the primary plugin listed on the Coverage.py plugins page is the Django template plugin.

See the django_coverage_plugin PyPI page for its installation instructions. It just needs a pip install and activation in [coverage:run].

This bit depends on how you run your tests. I prefer using pytest with pytest-django. However many, projects use the default Django test runner, so I’ll describe that first.

If you’re using manage.py test, you need to change the way you run it. You need to wrap it with three coverage commands like so:

99% - looks like I have a little bit of work to do on my test application!

Having to run three commands sucks. That’s three times as many commands as before!

Update (2020-01-06): Previously the below section recommended a custom test management command. However, since this will only be run after some imports, it's not possible to record 100% coverage this way. Thanks to Hervé Le Roy for reporting this.

However, there’s a more integrated way of achieving this inside Django. We can patch manage.py to call Coverage.py’s API to measure when we run the test command. Here’s how, based on the default manage.py in Django 3.0:

Run the tests again and you'll see it in use:

(Okay, it’s still 99%. Spoiler: I’m actually not going to fix that in this post because I’m lazy.)

It’s less work to set up Coverage testing in the magical land of pytest. Simply install the pytest-cov plugin and follow its configuration guide.

The plugin will ignore the [coverage:report] section and source setting in the configuration, in favour of its own pytest arguments. We can set these in our pytest configuration’s addopts setting. For example in our pytest.ini we might have:

(Ignore the angry red from my blog’s syntax highlighter.)

Run pytest again and you’ll see the coverage report at the end of the pytest report:

The terminal report is great but it can be hard to join this data back with your code. Looking at uncovered lines requires:

This gets tiring quickly!

Coverage.py has a very useful feature to automate this merging, the HTML report.

After running coverage run, the coverage data is stored in the .coverage file. Run this command to generate an HTML report from this file:

This creates a folder called htmlcov. Open up htmlcov/index.html and you’ll see something like this: 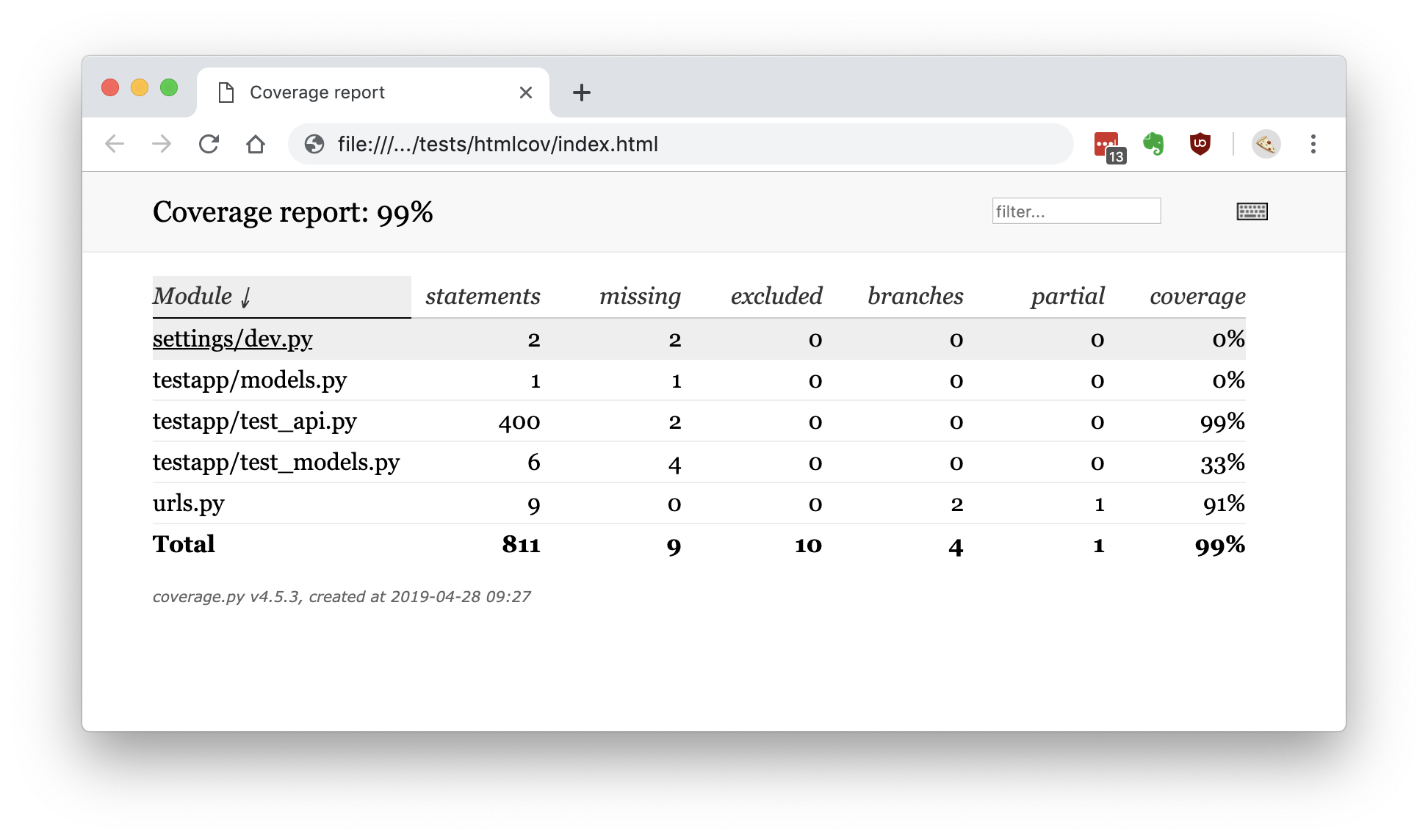 Click on an individual file to see line by line coverage information: 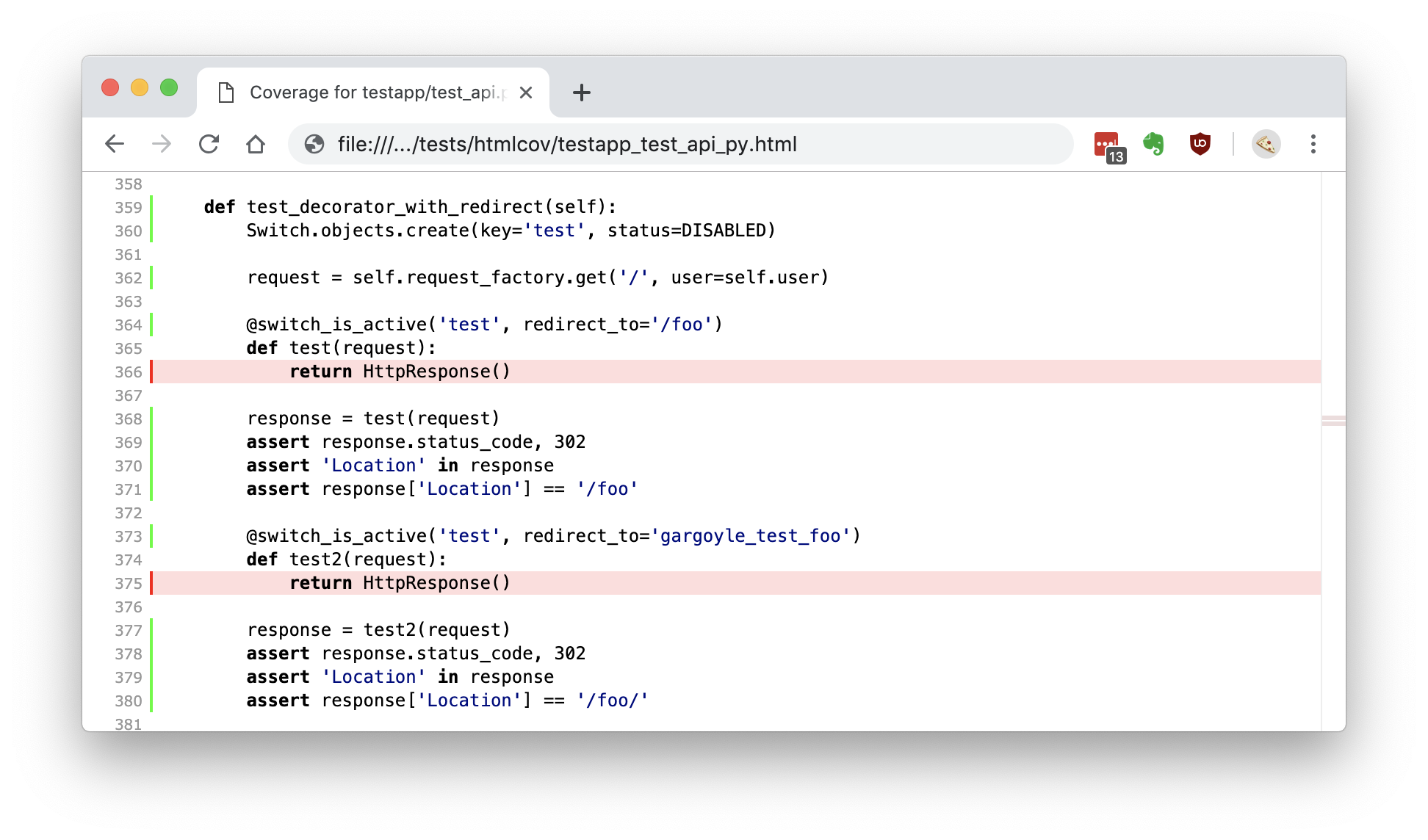 The highlighted red lines are not covered and need work.

Django itself uses this on its Jenkins test server. See the “HTML Coverage Report” on the djangoci.com project django-coverage. 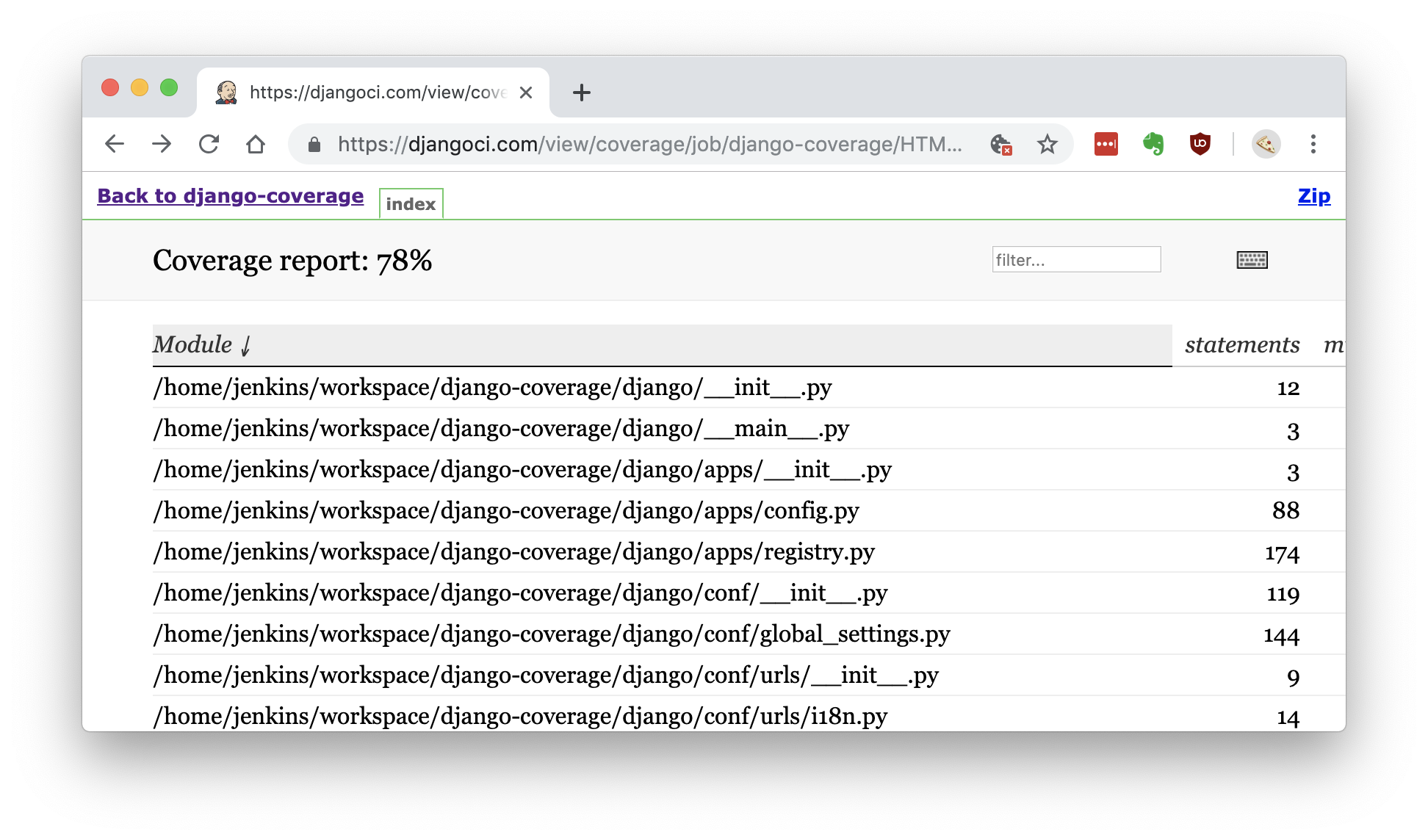 Coverage.py is built-in to this editor, in the “Run &LTname> with coverage” feature.

This is great for individual development but less so for a team as other developers may not use PyCharm. Also it won’t be automatically run in your tests or your Continuous Integration pipeline.

Some advocate for 100% branch coverage on every project. Others are skeptical, and even believe it to be a waste of time.

For examples of this debate, see this Stack Overflow question and this one.

First, it depends on your project’s maturity. If you’re writing an MVP and moving fast with few tests, coverage will definitely slow you down. But if your project is supporting anything of value, it’s an investment for quality.

Second, it depends on your tests. If your tests are low quality, Coverage won’t magically improve them. That said, it can be a tool to help you work towards smaller, better targeted tests.

Third, it depends on your code. Certain types of code are harder to test, for example branches dealing with concurrent conditions.

99 AIN’T GOT I BUT PROBLEMS CONCURRENCY ONE

Some tools, such as unittest.mock, help us reach those hard branches. However, it might be a lot of work to cover them all, taking time away from other means of verification.

Fourth, it depends on your other tooling. If you have good code review, quality tests, fast deploys, and detailed monitoring, you already have many defences against bugs. Perhaps 100% coverage won’t add much, but normally these areas are all a bit lacking or not possible. For example, if you’re working a solo project, you don’t have code review, so 100% coverage can be a great boon.

To conclude, I think that coverage is a great addition to any project, but it shouldn’t be the only priority. A pragmatic balance is to set up Coverage for 100% branch coverage, but to be unafraid of adding # pragma: no cover. These comments may be ugly, but at least they mark untested sections intentionally. If no cover code crashes in production, you should be less surprised.

Also, review these comments periodically with a simple search. You might learn more and change your mind about how easy it is to test those sections.

Go forth and cover your tests!

If you used this post to improve your test suite, I’d love to hear your story. Tell me via Twitter or email - contact details are on the front page.